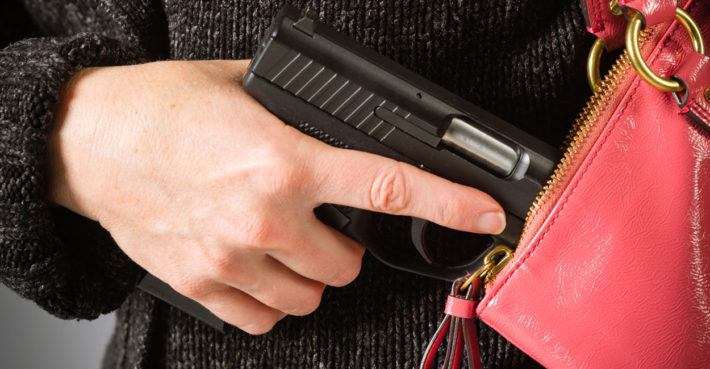 Guns Saved These Americans From Assault and Robbery in July

Amy Swearer : Amy Swearer is a senior legal policy analyst at the Meese Center for Legal and Judicial Studies at The Heritage Foundation.

Lucas Drill : Lucas Drill is a member of the Young Leaders Program at The Heritage Foundation.

In the wake of tragic mass shootings, such as those occurring in recent days in El Paso, Texas, and Dayton, Ohio, it’s understandable that the nation would search for answers.

It’s easy to blame the tools used in the killings and call for measures that would broadly restrict public access to them, instead of focusing on the more complex reality of why these individuals committed such horrible crimes in the first place.

Communities are grieving, and everyone with a beating heart and an ounce of humanity grieves with them. We cannot, however, allow our grief to blind us to the important role firearms play in defending the rights and liberties of law-abiding Americans.

Yes, firearms can be used to carry out horrific acts of violence, and we should absolutely pursue ways of ensuring that individuals who pose serious risks of danger to themselves or others are disarmed long before they can commit these types of atrocities.

As the Centers for Disease Control and Prevention noted in a 2013 report, almost all national studies of defensive gun uses have found that firearms are used in self-defense between 500,000 and 3 million times every year in the United States.

Even the center’s own internal data indicates that firearms are used defensively about 1 million times a year.

And, of course, this doesn’t include the countless number of times that tens of millions of Americans use their firearms for other lawful purposes, such as hunting or recreational target shooting.

In an effort to keep the national conversation grounded in this important context, every month this year we’ve highlighted just a handful of the many times law-abiding citizens have used their firearms in defense of their rights or the rights of those around them.

Here are the January, February, March, April, May, and June examples. July was no different.

In recent weeks, while firearms were used to commit several high-profile, heinous acts against innocent people, they were also used by many innocent people to fight back against those seeking to do them harm.

July 3, Summerville, South Carolina. Concerned neighbors went to check out loud noises that they thought might be someone breaking into the local church, only to discover a very drunk trespasser roaming through a nearby backyard.

The drunk trespasser began attacking one of the neighbors, who then shot the drunk man in self-defense after his warning shot went unheeded.

Law enforcement officers determined the neighbor acted justifiably, and the drunk man is facing charges related to the incident.

July 5, Danville, Kentucky. A homeowner held a would-be thief at gunpoint until law enforcement arrived, after investigating why his gate intercom rang at 4 a.m.

The homeowner looked outside and saw that his vehicles had been moved, then found the cars parked away from the house, with the thief still inside one of them.

July 10, Summerfield, Florida. A disabled 61-year-old homeowner kept his AR-15 loaded by his bedside after a suspicious interaction earlier in the day with a man who was looking through the sliding glass door on his back porch.

When the homeowner awoke to loud noises that night, he grabbed his rifle just in time to defend himself from four armed men who had broken into his home.

He killed two of the armed intruders and sent the other two fleeing, until they were tracked down by a police K9 unit. Despite being outnumbered and wounded himself, the homeowner survived.

July 11, Tampa, Florida. A pastor, joined by a deacon, held an intruder at gunpoint for nearly 10 minutes after responding to the church’s alarm system and discovering a man who had used a brick to break in. The intruder was in the process of stealing electronics from the place of worship.

July 15, Phoenix. A retired military law enforcement officer acted quickly to defend himself and his family against a home invasion, drawing his handgun from his bedside table and chasing the intruder out of the house.

After running, the suspect broke into another home and attempted to sexually assault a woman before being arrested by police, who the first homeowner had called.

July 16, San Diego. A man armed with a knife broke into a home and began stabbing the 54-year-old homeowner until the homeowner’s son was able to intervene, shooting and killing the attacker with his father’s gun.

The home invasion caused some residents to question the logic of a proposed local ordinance that would require gun owners to keep their firearms locked in a safe or left inoperable when not on their person.

July 17, Oneida, Tennessee. A man rushed to his mother’s home after receiving a phone call from the mother’s caretaker about hearing suspicious talking from other parts of the house.

He discovered a woman in the process of burglarizing the home who was armed with a pocket knife, and held her at gunpoint until police arrived.

July 24, Rochester, New Hampshire. A father, whose two young children were in the car with him, spotted a would-be burglar while pulling up in the driveway of his home.

The father confronted the man and held him at gunpoint while waiting for law enforcement. He told reporters that while he wished he had not needed to draw his gun in the presence of his children, he hopes it taught them a valuable lesson.

July 27, High Point, North Carolina. A woman fatally shot an ax-wielding man who broke into her property and charged at her. The man had assaulted the same woman earlier that night but was able to elude police.

July 29, Prospect, Kentucky. A homeowner brandished his handgun to chase away a man attempting to break into his home. The incident was captured by a security camera, and the homeowner believes that the presence of the firearm allowed him to scare off the suspect without putting himself in danger.

July 31, Nashville. An Uber driver defended himself and his passenger by shooting a man who opened fire on the driver’s vehicle. The man—who had a long history of violent crimes, including armed robbery—said he had felt “disrespected” by the Uber driver’s passenger and followed the car to exact revenge.

Neither the passenger nor the Uber driver was harmed, but the perpetrator was later treated at a local hospital for wounds to his chest and arm.

These types of everyday, lawful gun uses are not something we can afford to forget in our desire to just “do something” about mass public shootings, which, while statistically incredibly rare, still strike terror into our souls and break our hearts.

Every day in this country, law-abiding gun owners rely on their Second Amendment rights to stand up against the very types of evil that have so deeply horrified us in recent national headlines.

Neither these Americans, nor their firearms, are the enemy of a free nation. They are, rather, an important and regular deterrent to those who would infringe on the inalienable rights of others.

The Daily Signal depends on the support of readers like you. Donate now